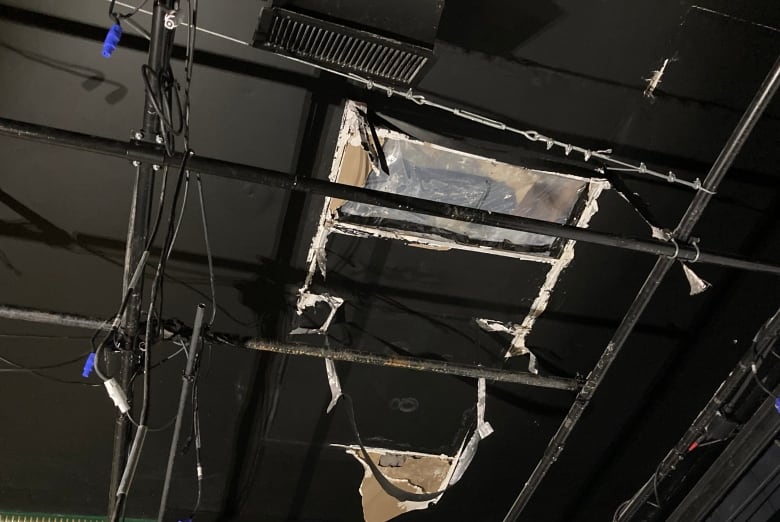 A Winnipeg theater that was finally able to open its doors for the first time last month must close them once again after an ice dam caused water to leak through the roof, damaging the stage.

Andrew Davidson, the owner of the Gargoyle Theater on Ellice Avenue near Sherbrook Street, first noticed the water coming through the ceiling directly above the stage.

“That was a terrible and sickening thing to see,” Davidson told Marcy Markusa on CBC Manitoba’s Information Radio.

The local theater was set to open its doors in 2020 when the pandemic hit. It finally opened in February of 2022 with its first show.

Gargoyle Theater on Ellice Avenue was hoping to be a venue for the Fringe Festival. (Travis Golby/CBC)

Davidson said that putting a summer show that was supposed to be announced this week on hold upset him, as the theater company behind the show has worked hard to bring it to life.

“They are very far in the process and I’m sure they’ll find another venue,” Davidson said.

He also said the Gargoyle would be happy to have the theater company back.

Davidson had originally planned for the theater to be used as a venue for the Winnipeg Fringe Festival, coming up in July.

“Now I can’t guarantee if it’ll be ready,” he said.

Contractors busier than ever

The Gargoyle Theater is one of many places across the city requiring repairs after Manitoba saw unusually high snowfall amounts this winter.

One Winnipeg contractor said the volume of calls has been high this year.

“We normally get about 70-80 calls per week, and now it’s almost our daily average,” said Andrew Feeney, vice-president of Priority Restoration.

It sometimes takes two or three days for the contracting company to conduct an inspection if it’s just water damage with no harm or safety issues, Feeney said. The company is trying to prioritize jobs depending on the extent of damage.

LISTS | A local theater has had to close its doors for now, due to some unexpected water damage:

Information Radio – MB5:17A Winnipeg theater has had to close its doors due to some unexpected water damage: Find out about the future of the Gargoyle Theatre

The Gargoyle Theater on Ellice Avenue just recently opened to audiences, but now water damage has closed the curtain on upcoming shows. Andrew Davidson, owner of the Gargoyle Theatre, tells host Marcy Markusa what work needs to be done before the show can go on. 5:17

Feeney also said if a building does have a leak, people should immediately try to contain the damage by putting towels or buckets where the water is dripping.

“Move any wooden furniture off the ground and if the damage is severe, I recommend calling the insurance company right away,” he said.

To avoid extensive damage, it’s important to keep eaves clear of ice and snow before the melt, keep window wells clean of debris and things that may block them, and make sure water hose pumps are not frozen, Feeney said.

The Finest in Viking Appliance Repair is Combined with Same Day...

Atlanta arborists are pledging to replace every tree they remove from...