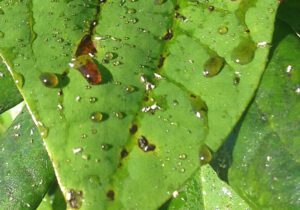 SPECIMEN: Crape myrtle trees look great, but they’re not native to Southern Ocean County, so be sure to monitor them regularly for signs of aphid infestation. (Supplied Photo)

The effects of flooding from Superstorm Sandy in 2012 wreaked havoc on Long Beach Island and parts of the mainland years after the storm dissipated and became etched into the archives of meteorological history in Southern Ocean County.

Case in point: the pine engraver beetle. Not long after the flood waters subsided, the brownish insect took up residence within Japanese black pines on LBI – a non-native but suitable tree with a high tolerance for sandy, salty soils and salt spray.

“When Sandy stormed through our area, all that saltwater stressed out the trees, especially the Japanese pines,” said Chris Hewey, general manager of For-Shore Weed Control (for-shore.com), which has a healthcare program aimed at keeping trees and shrubs strong and vibrant. “With the trees stressed so much, the engraver beetles showed up and took charge. They had plenty of stressed trees to feed on, and the population got big enough that they eventually started moving on to healthier pine trees. We’re starting to see a decline in the engraver beetle population, but these beetles are tough to deal with, and it’s taken a decade to accomplish it.”

In case it was too subtle of a key word in Hewey’s statements, let’s review and find it again, shall we? Ah, there it is: stress.

“The more stress a tree or shrub takes on, the more it’s susceptible to disease and predators,” said Katharine Sheridan, who along with John Zettel owns South Jersey Weed Control (sjweed.com), which also provides a shrub and tree healthcare program as part of its services. “Shrubs and trees can only take so much stress before problems arise, and if a property owner doesn’t monitor and manage the stress level of their trees and shrubs, small problems can become big ones really fast.”

Just as humans need to limit stressors to the body and mind to maintain good health, the same can be said of the tree and shrub friends in our yards. Think of it this way – if you’re not careful about what you eat, how much you hydrate, and the nutrients being delivered to your body, chances are, at some point, there’s going to be a breakdown and need for medical care. The stress created by not proactively caring for your body will eventually take its toll.

And, sure, while humans don’t have green foliage, bark or root systems that stretch deep into the ground, the parallel remains.

“You are what you eat and drink,” Sheridan said. “The nutrients that go into your body are important. The same thing goes for trees and shrubs. If you’re not paying attention to their health and the things that can stress their systems, they’re going to attract predators or become diseased.”

From an ecological standpoint, it makes sense. Predator animals often go after the weak and sick prey because they’re easy targets, and the same thing occurs with trees and shrubs amid our landscapes.

“If a plant isn’t healthy, it’s not going to look good, and it’s not going thrive in its environment,” Hewey said. “And once a tree or shrub develops a problem, it takes special treatment to get it healthy again. Being proactive is the best approach to tree and shrub care.”

YUCK: Honeydew excreted by aphids onto leaves of a shrub or tree is a sign of potentially dangerous things to come. As soon as you see it, contact a professional to deal with the problem to avoid further stress on the plant. (Supplied Photo)

According to Hewey, most of the time a property owner doesn’t contact For-Shore until there’s evidence of a problem – dead branches, discolored foliage, leaves dropping prematurely during the summer months, etc.

“About 75% of the time, someone won’t call unless there’s a problem,” he said. “But unlike a lawn, when things can go south in a matter of days, if you’re reporting a problem to us about a tree or shrub, it’s already late in the game. With trees and shrubs, the problems they develop take time, so it’s probably something that’s been going on for weeks or months.”

So how does a property owner take a proactive approach to tree and shrub care? Sheridan said the starting point is as simple as “opening your eyes to what’s going on.”

“Every week during the spring, summer and even early fall, get out there and look at your trees and shrubs,” she said. “Monitor them. Pay attention. Make sure everything looks OK.”

Hewey suggests carefully inspecting the color amid your landscapes – if what normally should be green is turning brown in certain spots, or if leaves are starting to develop a black, powdery look, or white streaks are starting to show on a majority of the foliage, that’s often a sign of pests are in the house.

“The honeydew that aphids leave behind is distinct, and if you’re seeing a lot of it, you can bet the tree is infested, especially if it’s a crape myrtle,” Hewey said. “If leaves are starting to show poor color, or a sooty mold is present, the plant probably has an infestation of pests. If you’re monitoring carefully, you’ll notice these things as the cycle begins and take care of it right away. If you’re not monitoring for these types of things, your shrub or tree could develop serious problems.”

Additionally, be careful about what you’re doing with shrubs and trees. Digging into the ground near them, pruning protocols and watering habits can have a significant impact. For instance, watering too much can create an environment for fungus or bacterial infections, such as canker, which, over time, can spread to the point of becoming “a death sentence for a tree,” Sheridan said, while digging too close to a tree’s root base or pruning too much of a shrub can cause unnecessary stress.

“Some people actually kill their plants because they water too much,” Hewey said. “And if your pruning practices aren’t in line with what the plant can tolerate, you can overstress it, and that will make it susceptible to insects or disease.”

Another important element of maintaining a proactive approach to the healthcare of trees and shrubs is making sure diseased or dead foliage is removed from among healthy branches or around the root base of the plant.

“If a plant develops some sort of fungus or disease and the leaves fall, those spores can stay on the leaf, and when the wind blows, those fungus spores are spread around,” Sheridan said. “Keep the dead stuff clear of the root base and from within the plant’s foliage, because that stuff could create further stress to the plant.”

By the way, native trees and shrubs “absolutely, 100% do better” in terms of staving off disease and pests, Sheridan said.

“I once had a client who told me, ‘This is the third blue spruce I’ve planted in this spot and each one died!’ and all I could think of was ‘Of course, because they’re not native to here and they don’t like salt air.’ Natives are better, no question,” she said. “If you’ve lost a shrub or tree to disease or pest infestation, there’s a very strong chance it’s because it wasn’t native to the area. The best thing, then, is to plant a native species in that spot.”

A Little Bit of Love

When it comes to proactively maintaining the health of shrubs and trees, Sheridan said it’s important to “show them some love” and make sure they’re being adequately fed and hydrated.

“We have a lot of sandy soil around here, and it’s not the best for plants because it doesn’t hold a lot of nutrients,” she said. “So if you have a shrub in more-sandy soil, you need to fertilize it or give it some other kind of rich, organic matter to help feed it. And if you’re in a really salty area, which is the case for most of our area, you have to give your plants adequate fresh water because the salt gets into the soil and stays there if you don’t clean it out. The more salt in the soil, the more stress to the root system of the plant. They’re a lot like us in that sense. If they’re not given proper nutrition and hydration, the potential for problems goes up.”

And, of course, at the first sign of a problem, don’t wait.

“Just like you’d go to a specialist to treat a certain medical condition so you can recover and get well, it’s best to call in an expert,” Hewey said. “We can do a soil drench that kills pests from the inside out as they feed on a plant. We can do topical sprays to help the plant. We have the expertise and knowledge base to figure out the best method of treatment and preventative maintenance later. Our goal is to get the plant back to its vigorous, healthy self, and that could take some time, but it’s worth the investment and can save you a lot of additional headaches and money.”

In other words, don’t take your chances that you can do better than those who are trained in specialized practices.

“It’s not the best thing to call us up and say, ‘I have a tree that’s bad and I need you to save it,’ because by then it’s probably too late,” Sheridan said. “We’re good at what we do, and we will do our best to help it recover, but sometimes the best thing to do is simply remove the plant and start over.”

Vanguard Roofing boss in court after worker dies in fall at...