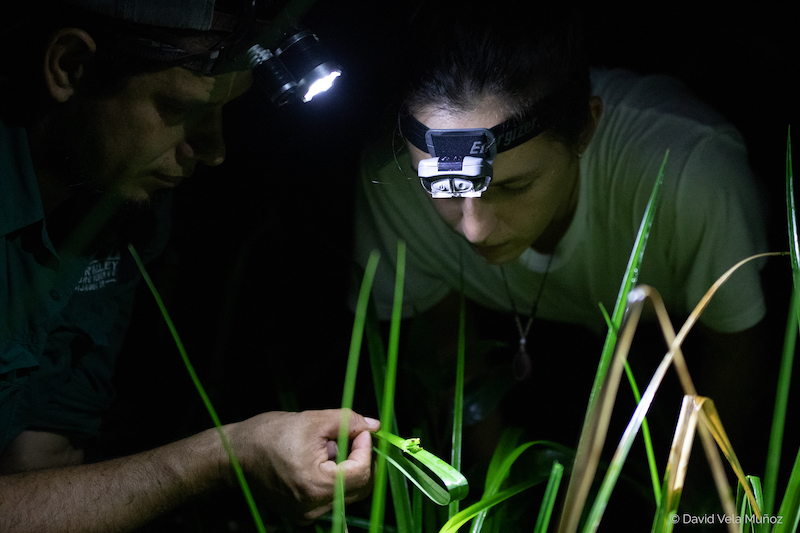 Nestled in a valley between two volcanoes, Donald Varela-Soto heard something unfamiliar. For six months, he searched for the source of a shrill frog call along the edge of a wetland in Tapir Valley Nature Reserve, a former cattle ranch in northern Costa Rica.

“I kept hearing this different sound in the wetland but was unable to find it,” Varela-Soto, co-owner of the private reserve, told Mongabay. “Then, on a particularly rainy day, the water rose in the wetland, pushing the frogs out to the edges, and that’s when I saw the person. It was like, wow, this is amazing! This is beautiful!”

The tapir valley tree frog (Tlalocohyla celeste) is only around 2 centimeters (0.8 inches) long, about the size of a bottle cap. Photo by Marco Molina.

Valeria Aspinal and Varela-Soto and watching a Tapir Valley tree frog in the wetland at Tapir Valley Nature Reserve, its only known habitat. Photo by David Vela Munoz.

The brilliant green frog, as it happens, is new to science. It’s minuscule, about the size of a bottle cap, and has a distinctive yellow line that runs halfway around its bright body. Soto and colleagues named it the Tapir Valley tree frog, with the scientific name of Tlalocohyla celeste in honor of the turquoise waters of a local river, the Río Celeste. A formal description of the species has now been published in the journal Zootaxa.

After Varela-Soto found the first male frog on that rainy day in 2018, Valeria Aspinall, a biologist and one of the study’s co-authors, found a female frog and observed frogs in amplexus (mating) and then laying eggs. The research team, which included Aspinall, co-author and herpetologist Juan Abarca, and sometimes Varela-Soto’s two young daughters (both under the age of 10 at the time), collected eggs and observed their metamorphoses into tadpoles and mature frogs. These observations and DNA analyzes confirmed that the species is indeed new to science.

Scientists think the Tapir Valley tree frog may be critically endangered. Its only known habitat is the 8-hectare (20-acre) wetland within the Tapir Valley Nature Reserve, which adjoins Tenorio Volcano National Park.

A female tapir valley tree frog (Tlalocohyla celeste) is shown ready to lay eggs, which are visible through her semi-transparent skin. Photo by Valeria Aspinall.

When Varela-Soto and Melvin Rodriguez bought the property that would become Tapir Valley Nature Reserve, the forest was peppered with cattle pasture. The team ousted the livestock more than 18 years ago and began restoring and rewilding the fields into forest. The new forest has attracted a wealth of plants and animals from surrounding forests, including collared peccaries (Pecari tajacu), jaguars (Panthera onca) and Baird’s tapirs (Tapirus bairdii).

“I love this frog, because it tells a larger story,” study co-author Esteban Brenes-Mora, executive director of the Costa Rica Wildlife Foundation (CRWF) and senior Mesoamerica associate for Re:wild, said in a statement. “When [Soto] started Tapir Valley Nature Reserve, it was to protect tapirs and help them move between forests. He didn’t know that there were completely new species to science living on the reserve, but if he hadn’t protected this place for tapirs, we might not have ever discovered this little frog.”

The tapir valley tree frog is only one of five species in the genus Tlalocohyla. Photo courtesy of Tapir Valley Nature Reserve.

As the years passed, Varela-Soto sought to make the 220-hectare (544-acre) Tapir Valley Nature Reserve a living laboratory to showcase different restoration techniques and practices. In some areas, the pasture was left alone, allowing the wind and animals to disperse seeds from neighboring forests in a process known as natural regeneration.

Other areas were left to regenerate but with efforts to control the grass naturally. The cattle pastures were covered in invasive grasses that didn’t allow many forest seeds to grow. Cutting the grass down with machetes gave the native plants a better chance of survival, allowing broad-leafed plants to sprout up in these areas and attract more birds, which, in turn, dispersed more seeds. Varela-Soto said he noticed a much faster forest regeneration in these maintained areas.

And finally, in some plots of land, the team planted trees. Initially, many of these were not native trees or the specific trees that are important to wildlife, but rather what was available to them in local nurseries. Nevertheless, this planted forest jump-started the process of restoration. Varela-Soto said many native tree species are now sprouting in these areas that were dispersed from neighboring primary forests by local wildlife.

“One of the main reasons we got the reserve is to protect the iconic species of tapir here,” Varela-Soto said. “The tapir is one of the main things helping us with our restoration process because it moves a lot and eats a lot.” As they move, tapirs transport tree seeds across the landscape and deposit them with a natural fertilizer.

The Costa Rica Wildlife Foundation has helped establish a tree nursery in Tapir Valley, so it can focus on planting threatened and endemic trees from the Guanacaste and Tilaran mountain ranges. Mostly, Brenes-Mora told Mongabay, they’re focused on jicaro danto (Parmentiera valerii), an endangered tree that’s dependent on tapirs for its dispersal and survival.

It was tapirs that first drew Brenes-Mora and the CRWF to the region around five years ago, after they heard reports of tapirs roaming around plantations in the area. Here, they saw the opportunity to connect and protect tapir habitat between two national parks, Miravalles Volcano National Park and Tenorio Volcano National Park. That work, which includes education programs, outreach to farmers and landowners, forest restoration and protection, is ongoing.

A pineapple farm in Costa Rica. As these large monocultures expand in Central America, forests are lost, and waterways polluted with chemical runoff. Image by Ted via Flickr (CC BY-NC 2.0)

Although Costa Rica has more protected area as a percentage of its total area than any other country in Latin America, the forests still face threats. Near Tapir Valley, cattle farming is expanding, as are pineapple monocultures, doused with herbicides and pesticides.

“In Costa Rica, there are no specific regulations about how to use herbicides on the properties nearby,” Varela-Soto said. “A lot of those chemicals end up in wetlands or creeks.”

So far, the Tapir Valley tree frog has only been found in this one wetland, primarily around the edges. Varela-Soto and his team battled an invasive grass, likely brought in by cattle, at the wetland’s edge. “We don’t want to use herbicides, which is the easiest way to kill the grass, because it harms the frogs and other wildlife… But it’s very costly to do that by hand.”

Cost is a common refrain. In general, Varela-Soto and Brenes-Mora say restoration is expensive. Even natural regeneration can cost the landowner income that would be coming in from grazing cattle. But ecotourism is a massive industry in Costa Rica. Soto said tourists and scientists visiting the reserve provide an income for his family and three full-time employees. He noted that local tour guides, lodges, food vendors and transportation services also benefit.

“Tapir Valley is an example of what can be achieved with the right decisions,” Brenes-Mora said. “In this case, it was a single man’s decision to get a deal with his co-owners, remove the cows, and then leave nature alone while pushing for a restoration process and having active protection… Tapir Valley is a great example of how wildlife and humans can co-exist.”

“[The tapir valley tree frog] is a very significant finding,” Aspinall told Mongabay. “Costa Rica is celebrating thanks to [Varela-Soto] and his conservation-driven mentality. And this is just a beautiful story, not only for science and conservation, but also as a human story.”

Liz Kimbrough is a staff writer for Mongabay. Find her on Twitter: @lizkimbrough_

FEEDBACK: Use this form to send a message to the author of this post. If you want to post a public comment, you can do that at the bottom of the page.