It’s supposed to be a bad time for stocks with exposure to the housing sector, with rising mortgage rates. But apparently no one told that to Ferguson (FERG -0.17%).

I previously wrote about the U.K.-based distributor of heating and plumbing supplies in October, and the stock has returned about 35% since that time. It’s up roughly 22% over the past six months, vastly outperforming the S&P 500 and Nasdaq, which are up 4% and down 2%, respectively, over the same time frame.

Yet, even after outperforming the broader market, there is still plenty to like about Ferguson, and it’s not too late to add shares of the company to your portfolio. 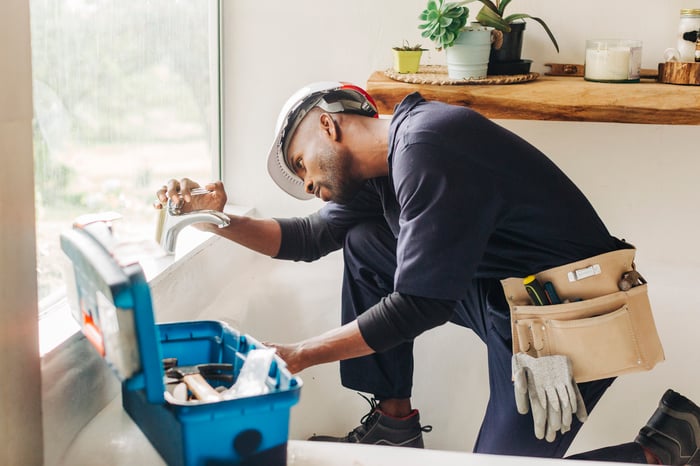 Table of Contents hide
1 What is Ferguson?
2 Over a million customers
3 The valuation and the dividend

Ferguson is a distributor of plumbing and heating supplies in North America, serving a variety of end markets including residential, commercial, industrial, and government and infrastructure. The U.K.-based company was founded in 1887.

The stock was previously listed in the U.K., but it made the switch to an NYSE listing in 2022. The company has shed its businesses outside North America, so the switch to the New York exchange made sense. It should help the company gain more visibility with U.S. investors, garner more sell-side coverage from Wall Street, and make it an option for funds that focus on U.S.-listed companies.

Ferguson has steadily increased net sales over the past five years, from just over $1.8 billion in 2018 to $2.85 billion in 2022. Net sales jumped 25.3% from 2021 to 2022, and adjusted operating profit spiked 41.1%. During the most recent quarter, the company reported that year-over-year net sales increased 16.6% and adjusted operating profit rose 12.7%, and the stock has performed strongly ever since.

The company operates in a fragmented market, dealing with 10,000 small or medium-size competitors. As a large publicly traded company with significant resources, Ferguson has the advantage of scale over these smaller competitors. It also makes frequent use of small, bolt-on acquisitions to fuel growth, with 50 of them over the last five years.

Over a million customers

One aspect of Ferguson that I really like is how diversified it is. The company has over 1 million customers, and no single customer accounts for more than 1% of its revenue. It sells over 1 million products.

This broad diversification helps make it more defensive and protects it from customer-concentration risks such as a large client going out of business or switching to a different supplier.

The company’s end-market demand is fairly spread out. About 60% of sales come from remodeling and 40% come from new construction. Meanwhile, 54% of its sales are from the residential market, with nonresidential making up the rest.

So even in a down housing market, Ferguson is generating significant revenue from people who are staying put and remodeling, while it also has exposure to commercial and industrial demand.

The company increased U.S. revenue in each of these markets during the most recent quarter, with year-over-year growth of 15% in residential, 20% in nonresidential, 18% in commercial, 27% in civil and infrastructure, and 22% in industrial.

The valuation and the dividend

Even after their strong run, shares of Ferguson don’t look prohibitive from a valuation perspective. They trade at a slight discount to the broader market with a price-to-earnings multiple of just under 14.

Furthermore, it is a dividend stock yielding 1.8%. Ferguson’s quarterly dividend of $0.75 is a 9% increase from last year.

The company is adding to these returns by repurchasing a significant number of shares. It recently authorized a $2.5 billion buyback program, which would equate to nearly 10% of the company’s current market capitalization. During the first quarter of 2023, the company bought back $366 million worth of shares. Between dividends and share repurchases, it has returned $8.5 billion to shareholders over the past decade.

Ferguson is well-diversified across different end markets, giving it some defensiveness against any potential weakness in the residential market, and it is extraordinarily diversified in its customer base. The company is modestly valued, it pays a small but growing dividend, and it buys back shares.

Plus, it has proven to be a durable business that has stood the test of time for well over a century. Given these factors, it’s hard not to like Ferguson as an investment.

Torrey is hiring – Interior Designer in New York, NY, US

Teleperformance Propels Global Reforestation in Partnership with One Tree Planted

Steep Slope Roofing Materials Market to Reach US$ 17.4 Bn by...