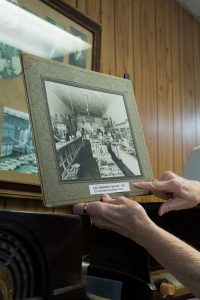 Family-owned and operated McNeil’s Appliance on Oak Street is scheduled to close its doors on Aug. 13 after nearly 60 years.

A wall of photos inside McNeill’s Appliance store shows early pictures of the business on August 3, 2022. Kristian Freeman

Loyal customers expressed their disheartenment following the closure announcement. Longtime customer Marie Nuchols, 53, first bought appliances at McNeil’s in 1995 and has continued to return for repairs.

“The McNeil’s parts department has always been really reliable when it came to finding and replacing odd parts,” Nuchols said. “We could not have kept our appliances as long as we did if it were not for their excellent repair services. I think that is what I will miss most about McNeil’s closing. We might not have come into the store often, but it felt like they always had our back when we needed them.”

Nuchols said she and her husband are worried about how the loss of the establishment will dampen the community.

“McNeil’s has been a terrific addition to the Denton community for decades now,” Nuchols said. “We can’t find their level of service or professionalism at a big box store. Losing McNeil’s, and other home-grown businesses like it, makes this town feel less like Denton and more like Plano or Frisco.”

McNeil’s has operated in Denton for 84 years at various locations before eventually settling at its current spot. Originally separate stores, Ball Furniture Company and McNeil Appliance merged when Charles McNeil and Virginia Ball married, according to its website. Ball graduated from UNT in 2005 while in her 70s decades after she initially enrolled. The store is currently run by McNeil and Ball’s daughter Pam Grimes.

Pam Grimes shows off a 1928 picture of the Ball Brother’s Grocery store on August 3, 2022. Kristian Freeman

“I’ve gotten to retirement age now, and my kids and brothers’ kids they are all grown,” Grimes said. “I don’t have anyone else that is wanting to come up and go on with [the business].”

After announcing the closure in July to employees and shoppers through its website, the store released an announcement that they are negotiating with potential buyers. It is unknown whether McNeil’s will permanently close in August or if the business will sell and stay open, but Grimes hopes the history and legacy of the store can live on. Grimes is not yet sure what will happen to the vintage appliances and museum of historical items that lie in a timeline around the store.

“We have got several [potential buyers] and we will be working on that over the next few weeks,” Grimes said.

Although many local businesses are closing due to rising operating costs, Grimes said the closure is not due to inflation and the business has run its course.

The store has been around for so long that employees said the business feels like a family. Calinda Buice, parts and service coordinator and employee of 36 years, said it is sad to see the business face the prospect of closure. Buice said the store has remained consistent throughout the years.

“The store itself, [hasn’t changed],” Buice said. “The business changes – you know, the customers change, priorities change. The store is actually just about the same as when I started to work here.”

The store is set to remain open through Aug. 13 with regular hours. Additional information about the store’s closure and potential purchase is being released as developments arise.

Kitchen Tips To Make Your Tools And Appliances Last