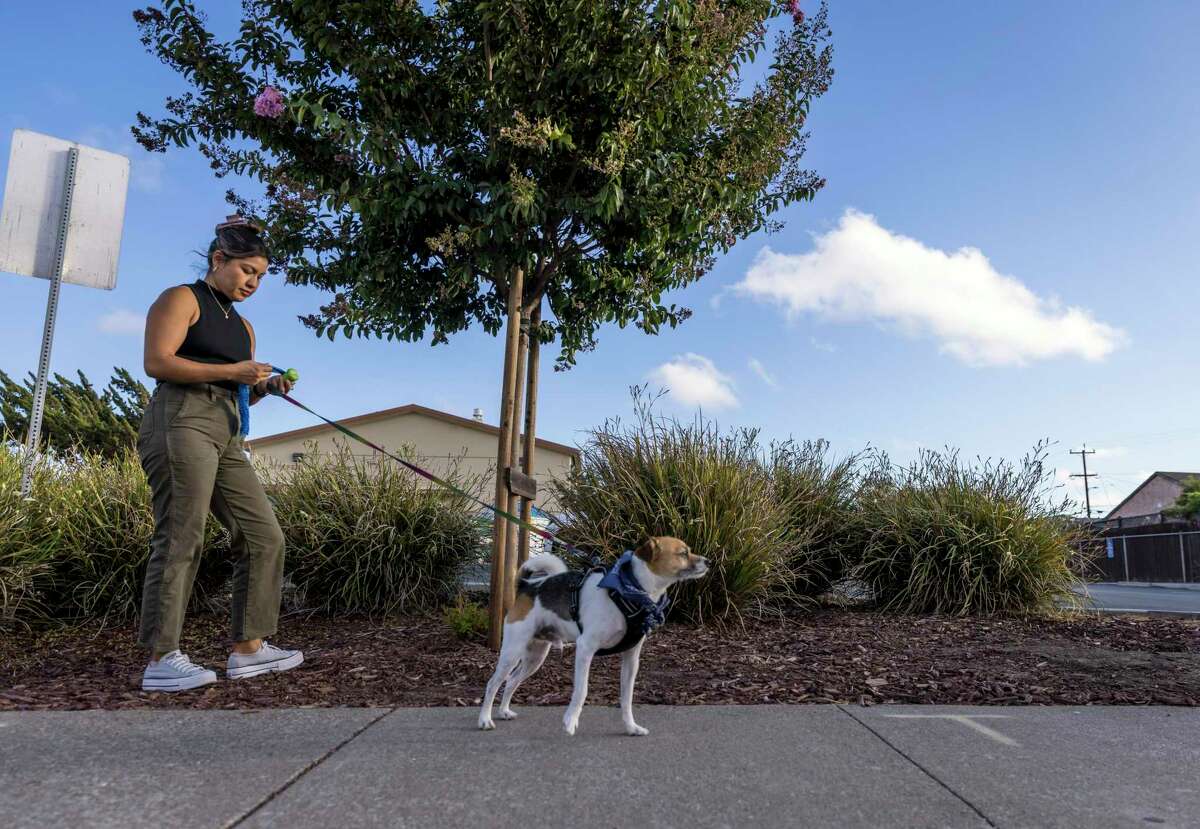 Ashland resident Diana Maravilla can count on one hand the number of trees along the route she walks her terriers Foxy and Linus.

On days like Thursday, when the thermostat shot to at least 102 degrees for the third time in five days, her walks become a dangerous game of hide and seek.

“I’m having to stop for shade at any tree I find because I know it’s going to be a while before we see another one,” Maravilla said. “As an environment, it’s not safe for anyone.”

Despite Ashland being named after the towering ash trees of Oregon, actually finding tree shade is near impossible. It’s a familiar plight to Maravilla’s fellow residents of western Alameda County, in an unincorporated area with a name that evokes paradise: Eden.

But that name, too, believed reality.

Eden includes the neighborhoods of Ashland, Cherryland, Hayward Acres and San Lorenzo, where 3% of the terrain had shade-producing trees in 2018, according to the most recently available data from the Alameda County Public Health Department. A lack of tree cover is one of the factors climate experts say exists in low-income communities that are more vulnerable to the kind of extreme heat that stifled California during a historic heat wave last week.

Diana Maravilla lives in the Eden area of ​​Alameda County, where less than 3% percent of the terrain has tree cover. The lack of shade became especially noticeable during last week’s historic heat wave, when Maravilla and her dogs struggled to find cover from the inescapable sun.

The Eden area, which is 36% Latino, is home to these communities. The area was the source of 22% of Alameda County’s unemployment claims in October 2021, despite Eden’s 147,000 residents accounting for only 8% of the county’s population.

Maravilla is an environmental justice expert who also serves as the health and wellness coordinator for the San Lorenzo Unified School District. In her job, she identifies the local inequities that negatively impact the health of the district’s roughly 10,000 students and their families.

Maravilla said many Eden area residents live in older housing without air conditioning or personal vehicles. Further compounding matters is the political reality of living in the unincorporated parts of the county, where people might not know who their elected supervisors are or how to lobby for infrastructure investments.

Meanwhile, the planet continues to warm. Alameda County estimates that by 2050, extreme heat days where temperatures are almost 93 degrees or above will happen roughly three times as often as they did in 2018.

Ashland’s Thursday temperature of 102 degrees was 21 degrees above the neighborhood’s temperature on the same day last year.

Along Ashland’s main thoroughfare of East 14th Street that afternoon, pedestrians and bikers drank from water bottles as they waited at stop lights and crosswalks. Others fanned themselves with hats, spare t-shirts or their hands as they walked into local businesses.

On one of the busier blocks, between 163rd and 164th avenues, four palm trees offered little shade outside of Tom Eplin’s Automotive Center.

Heat accounts for more fatalities than any other weather-related hazard in the country, according to the US Natural Hazard Statistics. Worsening climate change is making California warmer and drier. The neighborhoods destined to be hurt the most by the rising temperatures are places like Eden, where residents are lower-income and less likely to have access to personal vehicles, in-home air conditioning or natural shade.

Environmental inequities like this can, in part, be traced to the country’s history of racist housing policies like redlining, according to a 2020 study published in the journal Climate. Redlining was the federal government’s way of steering investment away from majority-Black and immigrant communities and toward white neighborhoods. The practice, coupled with urban renewal in the postwar era, exacerbated the segregation and inequality in these communities that are still visible today.

A 2021 study published in the Journal Plos One found that low-income neighborhoods had on average over 15% less tree cover and were 1.5 degrees Celsius hotter than their high-income counterparts.

What’s at play in these communities is an “urban heat island effect,” explained Jennifer Burney, an environmental scientist at UC San Diego.

Metropolitan areas with dense infrastructure tend to be warmer because of the ways that they absorb and store heat while areas with natural landscapes tend to be cooler because of the shade and moisture that trees and vegetation provide. A city’s physical structure impacts “the local environment because it changes the amount of sunlight that is reflected by the surface of the earth,” Burney added.

But Burney said the same heat vulnerabilities can also be found in newer cities.

“So it suggests that it’s not just the legacy of explicitly discriminatory housing policy that’s sort of reaching generations into the future,” Burney said. “We know that to be true for sure. But additionally, the default settings on how governments go about zoning and permitting are creating these disparities all over again.”

Diana Maravilla stands with her Jack Russell Terrier, Foxy, under one of the few trees on Tulsa Street in her Ashland neighborhood. During last week’s heat wave, Maravilla said she would pause under every tree she found because she knew it would be a long stretch before she could find another one.

Three years ago, several government agencies in Alameda County collaborated to launch the Cooling Our Communities program, a tree-planting and heat preparedness pilot project. The county created heat vulnerability maps, using features such as socioeconomic status, to determine where to focus their tree planting and community outreach work.

“When the Planning Department staff saw maps of Alameda County overlaying factors that contribute to heat vulnerability, such as low tree cover, they wanted to take action to reduce heat vulnerability in unincorporated communities,” Sarah Church, the sustainability project manager of the Alameda County General Services Agency Office of Sustainability, said in an email. “They focused efforts on Ashland and Cherryland, where tree cover was less than 1 percent.”

The program ran from 2019 until this year, resulted in over 315 trees planted and the creation of multilanguage pocket books on health and heat.

Depending on the type of tree planted and where it’s located, it may be another five to 10 years before these trees create enough cover to have a measurable cooling impact.

Elsewhere in the East Bay, efforts are underway to establish resiliency centers, where community members can go when temperatures are too high. Shina Robinson, the resiliency hubs manager of the Asian Pacific Environmental Network, said the network and its partners plan to establish its first resiliency center in Oakland’s Chinatown, in the soon-to-be renovated Lincoln Recreation Center.

Robinson said that APEN will tailor its resiliency center to the community’s needs, making it a place where people can come to escape poor air quality, charge their phones, refrigerate their medications and more. Robinson said that community members had to fend for themselves and that finding equitable climate solutions and investing back in the community are essential steps in addressing environmental racism.

“Folks shouldn’t have been in sacrifice zones to begin with,” Robinson said.

Aisha Perry lives in one of these areas. She was parking at Launder Land, a laundromat along Ashland’s East 14th Street, on Thursday when the temperatures were creeping into triple digits.

“I could have walked over here,” Perry said as she pulled a small gray laundry bag out her backseat. “But I’m not trying to walk in this heat. I don’t think anybody should.”

Three recently planted trees about 6 feet high stood near the parking lot. Less than a dozen trees of about the same size were scattered along sidewalks and in the East 14th Street median. Outside of those, there was little visible natural reprieve from the heat for several blocks.

As Perry walked toward Launder Land’s entrance, she pointed to a few of the small trees behind her car: “We could use a few more of those, that’s for sure.”