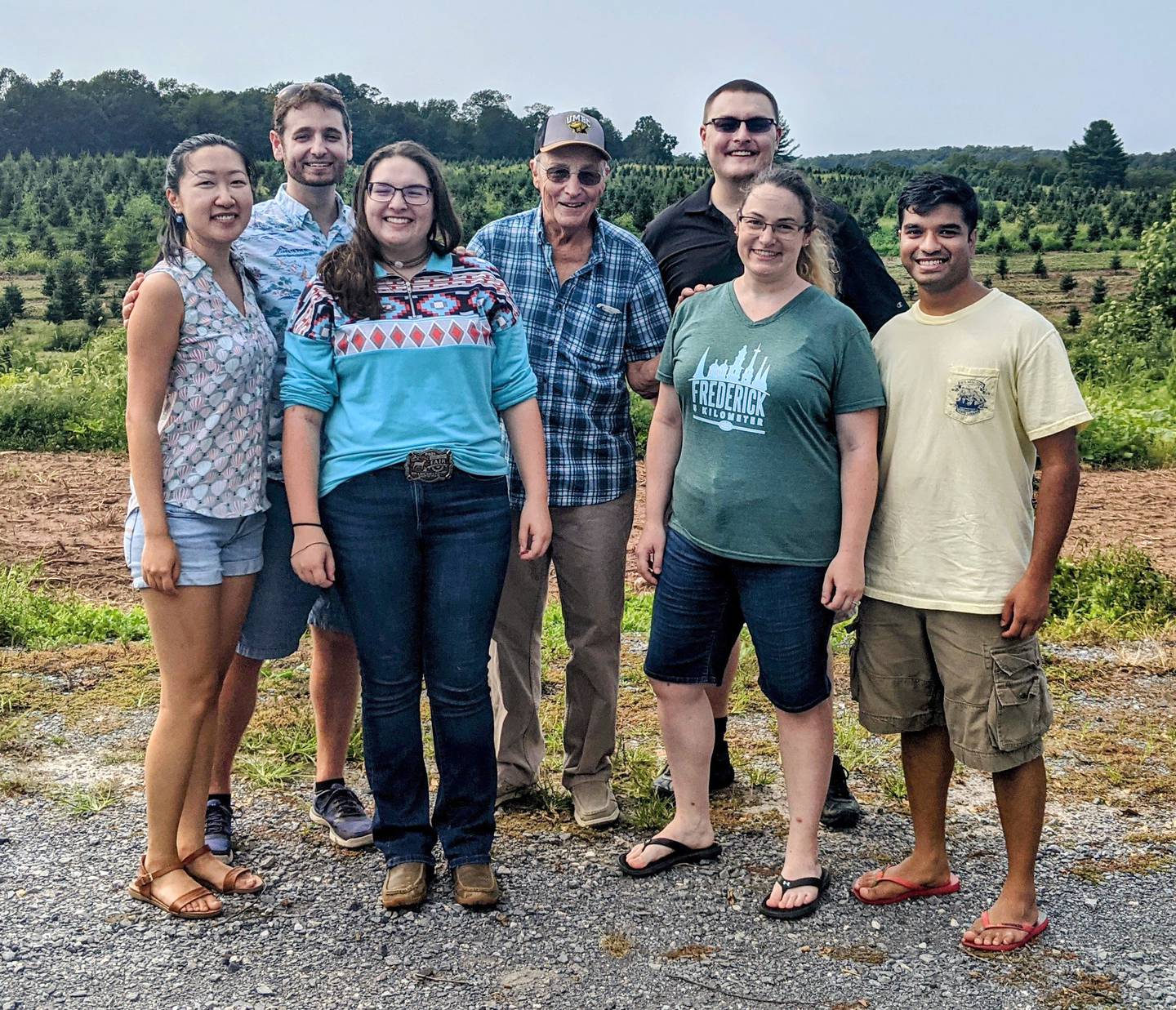 To Ronnie Sewell, owning a Christmas tree farm is the best job in the world.

“I have everything I possibly want here,” says Sewell, 80, who loves the glossy, sparkling finish of his trees’ needles get after a strong summer rain. “It’s so rewarding.”

Ronnie Sewell stands among the Christmas trees. Sewell’s Farm, is a Christmas tree farm that has been operating in the Taneytown area since 1984. The city of Taneytown recently annexed the Sewell property and farm owner Ronnie Sewell has a buying option with a real estate developer so change is in the air. Until the land is formally sold, Sewell intends to keep raising and selling trees as long as his crop holds out. (Jeffrey F. Bill/Carroll County Times)

“In today’s busy world of getting up and driving a half hour to work and putting up with traffic and spilling coffee, what glorious world I live in,” Sewell said. “I can walk out the door, feed the cats and ride around the farm and it’s a definite inspiration.”

Sewell’s Farm has been in operation since 1984, selling Christmas trees to a diverse range of customers, including Boy Scouts troops and fire departments for wholesale as well as direct to families from as far away as West Virginia and the Eastern Shore who visit to cut their own trees each December.

But after decades of doing what he loves best, change is in the pine-scented air for both Sewell and the Christmas tree industry.

Last month, Sewell’s 126-acre property was officially annexed by the City of Taneytown, following the failure of a petition effort that tried to put the annexation to a public referendum. While Sewell has yet to sell the farm, in December 2019 he signed a purchasing option with home construction company NVR, Inc., which proposed building 340 single-family dwellings on the property in the annexation agreement. Sewell did not wish to disclose the terms of the sale.

The Taneytown City Council didn’t approve any concept plan as part of their July 11 annexation vote, but “obviously, the council was supportive of the basic idea,” according to city manager Jim Wieprecht. NVR would be subject to a lengthy planning process if they decide to move forward with development.

“We’re looking at a couple years in the quickest scenario before any houses are built,” Wieprecht said. “While we’ve seen some smaller residential subdivision projects get through the process more quickly, those haven’t involved building new streets or extending water and sewer services, as will be the case for the Sewell property.”

NVR, Inc. did not respond to a request for comment.

As the planning plays out, Sewell intends to keep farming for as long as he can.

“I enjoy seeing the look on people’s faces, particularly the children and grandparents, when they come in to purchase trees and know that they’re going to have a nice Christmas with a locally grown product,” he said.

Sewell is no stranger to changes in the farming business. He was born in 1941 in Howard County and grew up in Elkridge along Route 1, on what was then a rural country road.

“You could ride a bicycle for miles and never meet a car,” said Sewell, whose commute to school lasted an hour.

His father ran a grocery store then started a farm, where Sewell spent the bulk of his childhood and helped sell the fruit they grew. By 1960, the family had established Sewell’s Orchards, a thriving retail business that gave its name to the Columbia neighborhood later built on its land.

Sewell recalls Columbia founder James Rouse visiting the store one day, fresh off of purchasing property that would turn into his sprawling planned community. Housing developments and roads soon sprouted up alongside the orchard.

“It was just a very interesting transition to go from a farm boy to an urban fruit salesman,” Sewell said.

Even though the orchard embraced agro-tourism, with visitors picking their own peaches, apples and raspberries, it became readily apparent to the Sewells that they couldn’t keep farming in the middle of a city. With the death of their father in 1970, Sewell and his brother, Donald, started buying up farmland in the Taneytown area, including the property that would eventually become the Christmas tree farm.

Family remains central to the new farm, with one of Sewell’s daughters, Christine Miller, working for the business full-time, and his son, Ronnie Jr., helping with machinery and his other children and his grandkids pitching in as required, especially around the holidays. Despite the risks, Sewell is happy he stuck with farming through the years.

“There’s nothing guaranteed that you’re going to get a crop,” said Sewell, reflecting on when he transitioned to the Christmas tree business. “But it was well worth everything I accomplished at Sewell’s Orchard and then bringing that experience up here.”

Sewell and his ex-wife Lori agreed they were ready to sell the property in late 2019, but the pandemic slowed the process and NVR told Sewell he should continue farming as long as planning drags out.

“If we need to be here longer, we’ll have the product to sell,” said Sewell, who planted 5,000 trees this spring.

Before NVR officially completes the purchase, they can still submit a development plan for approval with the Taneytown Planning Commission, a body made up of five residents and a city council liaison. Wieprecht says it’s not at all unusual for the developer and property owners to be two separate parties on proposal documents.

The development sketch submitted as part of the annexation agreement called for “not more than 340 single family residential dwelling units consisting of approximately 85 semi-detached units and 170 single-family detached units.” Up to four homes per acre would be allowed thanks to a waiver approval in April by the Board of Carroll County Commissioners.

Wieprecht expects the developer’s first step to be to request a Community Village designation for the property, which allows for a variety of housing types not typical in the R-10,000 district for which the property is currently zoned. That designation must be approved by the Taneytown government.

When big news breaks, be the first to know.

Based on how long NVR waited for the annexation process to finish and conversations he’s had with them about the city’s sewer rehabilitation projects, Wieprecht anticipates the company will file for the designation “in the next couple of months,” but noted “it’s totally up to them when they want to start.”

Ronnie Sewell farms approximately 40 acres of Christmas Trees of his 60 acre farm. Sewell’s Farm, is a Christmas tree farm that has been operating in the Taneytown area since 1984. The city of Taneytown recently annexed the Sewell property and farm owner Ronnie Sewell has a buying option with a real estate developer so change is in the air. Until the land is formally sold, Sewell intends to keep raising and selling trees as long as his crop holds out. (Jeffrey F. Bill/Carroll County Times)

If Community Village designation is approved, NVR would then need to submit concept, preliminary and final plans to the planning commission, each one requiring its own public hearing and presentation.

“Our planning commission meetings are open to the public, and public comment is encouraged,” Wieprecht said. “There may be more presentations to the commission along the way, but there’s at least one presentation per stage.”

The engineering work to design the community as well as the major subdivision review process “will likely take over a year to complete,” according to Wieprecht, and the period between an initial concept presentation and issuing zoning certificates for new homes “is typically longer than two years.”

Once plans are approved and related administrative items checked off, a grading permit may be issued and the construction of water, sewer and storm systems and roads can begin. But Taneytown will still need to ensure it has the required infrastructure capacity before any development occurs.

In the meantime, Sewell is content to keep enjoying his farm, his cats and the Christmas trees.

“People say, ‘Well, you’re awful lucky,'” Sewell reflected. “You can’t begin to understand what a wonderful life this is.”

Coleman Roofing & Construction Advises Homeowners on What They Should Consider...